Here are five notoriously common issues that you can encounter with your final drive! Do you know how to troubleshoot them?

Here are some other blog posts to help:

Five of the most common problems encountered with a final drive motor are noise, vibration, overheating, leaks, and loss of power. Let’s take a look at how to troubleshoot these issues!

All construction equipment is going to be noisy, but sometimes you notice some new noises that weren’t there before. That is a symptom you should not ignore.

The two main causes of noise in a final drive motor are insufficient gear oil (or gear oil that should have been replaced a long time ago) and worn out bearings. Both of these will lead to worsening problems if they aren’t addressed. Your first step will be to check the gear oil levels and either level them out to the correct amount of change and replace it. 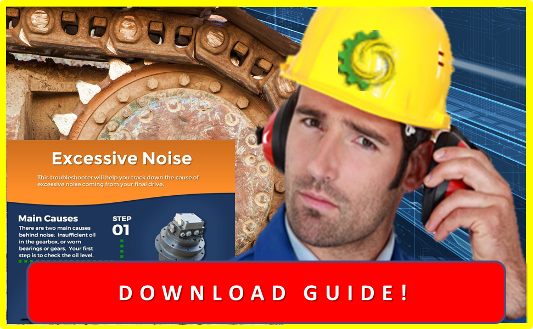 Bearings have a limited life span (which is shortened if you don’t keep the final drive gear oil at sufficient levels). When they start to wear out, they are going to make noise. If you’ve checked the gear oil levels and all is well there, then there is a strong chance that you have some bearings that need to be replaced.

Noises can vary for a final drive motor. For example, a motor might start with a grinding noise that progresses to a low-pitched growl at low speeds and then a high-pitched whine. The final drive in the video below exhibited these symptoms, along with some weaknesses. The problem was found to be the charge pump.

Vibration in mechanical systems isn’t a good thing, and can lead to loosened connections and surface damage among other things. If your lucky, the source will be a loose sprocket!

If you are running a tracked machine (like a CTL or excavator) and your final drive starts to vibrate, the most likely culprit is going to a loose sprocket. Luckily that is a simple fix: tighten or replace the sprocket bolts.

If you don’t have a loose sprocket, or the final drive motor is shuddering more than vibrating, that can point to a more serious problem in your final drive. This type of internal damage most typically results from your final drive just wearing out. And if it is wearing out too soon, then you probably haven’t maintained it properly.

While it's only natural that your final drive will heat up during operation, it shouldn’t be too hot to touch or steam when water contacts it. That means something is overheating!

Too little lubrication means more friction, and friction causes heat to generate. And, on top of that, not enough gear oil means the heat can’t be conducted away from key components. One of the most common causes behind overheating is lack of lubrication. You should check the gear oil levels on your final drive motor, and change out the gear oil if it’s time.

If you’ve eliminated gear oil and hot hydraulic fluid as the problem, the brakes are what you should check next. If they don’t release completely, there is going to be a lot of friction -- and damage

Another possible source of overheating in your final drive would be worn out bearings. Bearings are supposed to reduce friction and provide support, and then they start to wear out the result is a significant increase in friction. 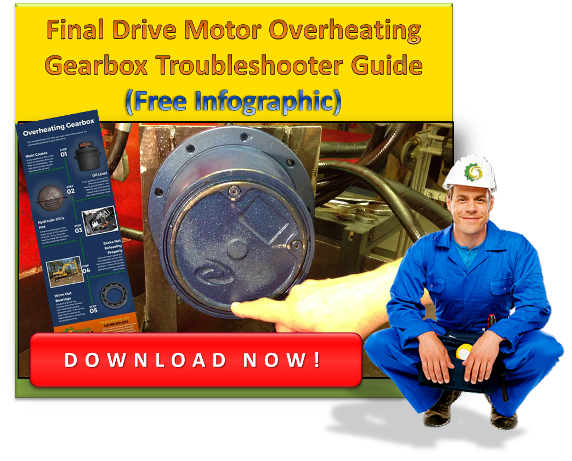 Leaks are something that you should never ignore: if fluids can get out of your final drive, then other things like dirt and moisture can get in. If you suspect a leak, you need to track down what is leaking and where it’s coming from.

A thicker fluid leaking from your final drive is going to be gear oil. If you have a tracked machine, you’ll notice leaking fluid behind the sprocket or dripping onto the tracks. If it is leaking where the sprocket is mounted, then the cause is failed mechanical seal (also known as a duo cone seal).

Another indication that you have a gear oil leak is when you have to top off the gear oil levels frequently. That oil is going somewhere, and you need to find out where the leak is at.

Hydraulic fluid is much thinner than gear oil, and there can be a lot more of it when it starts to leak. The cause is going to either be a hose leak or blown internal seal. And, to make things even more interesting, a blown seal can be caused by a clogged case drain filter.

Another common problem that operators encounter is the loss of power in one or both final drive motors.

Is the power loss on just one side?

If just one final drive is experiencing a loss of power, then your machine will tend to drift to one side. For example, if it keeps drifting to your left, then the problem will be on the left side. If it is a tracked machine, then you should check the track tensions to ensure it isn’t too tight, and visually inspect the tracks to see if debris might have become wedges in them.

If none of those seem to be the problem, then it is very likely that your final drive needs repair. In many cases, the final drive components are simply worn out -- or contamination in the system has accelerated how fast they wear..

Is the power loss on both sides?

On the other hand, if you are having trouble going uphill or moving forward when carrying a load, then there is a problem that is affecting both of your drive motors. This can be a problem if the tracks on both sides of your machine are too tight, which leads to friction and inefficiency.

A weak charge pump can also cause the drive motors to seem weak, as well as a malfunctioning brake system. If you are running an excavator, another potential cause lies in the swivel joint, which may be preventing sufficient hydraulic power to reach the final drive motors.

If you have any of these issues, this post should help you with some basic troubleshooting. However, unless you are very experienced with hydraulic repair, it would probably be a good idea to send it in to a hydraulic repair specialist who can not only troubleshoot and repair your motor, but help you take measures to keep it from happening again.