Crushing accidents don’t just happen when someone gets run over by equipment -- they can also occur when you’re working on your equipment and don’t take hazardous energy into account. 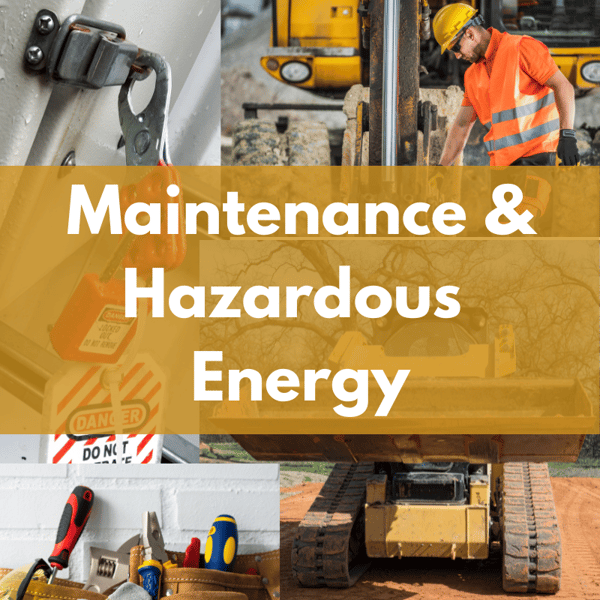 Here are a few other Shop Talk Blog posts you might enjoy:

In this Shop Talk Blog post, we’ll talk about hazardous energy, its dangers, and why it’s so important to be careful.

What is Hazardous Energy?

In a nutshell, hazardous energy is any energy source in equipment or machines that can pose a hazard to workers. This includes

Why is Hazardous Energy Important?

The main danger related to hazardous energy involves maintenance or service, where a release of energy or an unexpected startup can quickly lead to serious injury or death.  So what sort of injuries are we talking about? For compact equipment, these injuries include

What Goes Wrong With Hazardous Energy

So what causes these injuries? Experts agree that the five most common causes of injuries related to hazardous energy are …

Taking the time to bleed hydraulic lines, lowering booms or arms, or utilizing safety features -- such as lift arms -- can go a long way in preventing these types of risks.

In addition, to minimize the chances that 1, 2, and 3 occur, OSHA recommends having a LOTO procedure in compliance with OSHA 1910.147 - The control of hazardous energy (lockout/tagout). And when electrical systems and circuits are involved, OSHA 1910.333 - Selection and use of work practices also applies.

So, is hazardous energy really a danger -- but what does it have to do with crushing energies and maintenance? Let’s look at some examples through the years.

In April of 2004, an individual was working on the lift boom cylinder of a skid steer when it fell from its pin. A second individual had started to bleed the hydraulic lines but did not completely lower the bucket to the ground. The first employee fell to the ground, suffering fractures to his back, ankles, and legs.

While working on the hydraulic system of a skid steer loader with the bucket raised in February 2006, an individual was trapped when the bucket fell. He was later found dead beneath the bucket. Another incident in 2006 involved the repair of a faulty hydraulic valve on a Bobcat 763 when the loader frame fell suddenly, fatally crushing an individual between the front frame and loader frame.

On January 2007, an individual was maintaining a skid steer loader with the operator’s cab tilted forward. He accidentally actuated the loader lift arms while in the seating area, which pushed the cage back to its normal operating position. As a result, his chest was pinned between the seat and the underside of the case, leading to him being crushed and killed.

In January 2012, an individual performing maintenance on a skid steer loader was crushed between the chassis and lift arm. The result was asphyxiation. Then, an individual maintaining an excavator was fatally crushed by the bucket in October 2015.

An incident on July 28, 2016 involved a technician working on a Bobcat 853H to repair a hydraulic leak. At one point, the hydraulic hose failed -- while he was standing underneath the bucket. As a result, the bucket dropped on him, trapping him and leading to his asphyxiation due to the crushing of his upper body and bones.

In another Bobcat incident (this time a Bobcat S70), an individual cleaning in March 2019 was pinned by the neck between the boom bucket life bar and the horizontal bar above the caged seating area. There were no witnesses, and he was later found dead. Also in March, two individuals were killed when a skid steer bucket fell on them while they were installing a new control valve. In November 2019, an individual was connecting weights to the clamp of an excavator boom. The boom struck him, leading to fatal internal injuries.

At Texas Final Drive, we know our customers are careful, but we just want to re-emphasize the importance of safety during the maintenance and repair of your equipment. For example, several of these accidents could have been avoided using the lift arm supports on skids steers/CTLs. Please stay safe!