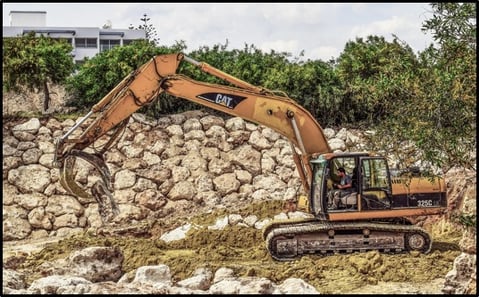 Excavators are found on every mining and construction site the world over. From bucket excavators to hydraulic excavators, these powerful machines have revolutionized the way we move earth. In this Shop Talk Blog post, we are going to discuss some of the most interesting facts we could track down about excavators.

First developed back in 1796, the grandfather of the modern hydraulic excavator was the steam shovel. William Otis was the first to patent a steam shovel in 1839, almost 40 years after the first one was invented. His steam shovel used chains, pulleys, and gears to transmit power for excavating dry earth. Its development was driven by the needs of railway expansion, which explains why it was mounted on railroad tracks. With regular improvements such as steel cables and 360-degree rotation, this basic design continued to be manufactured until the 1930s.

There is some debate about what qualifies as the world's largest hydraulic excavator. Most excavator aficionados agree that the Bucyrus RH400 holds the title. This massive machine served as the inspiration for the Decepticon Demolishor in the Transformers 2 film, and even had a cameo appearance. It weighs in at 980 tons and stands about 3 stories high. The RH400 can excavate 9,000 tons in a single hour, thanks in part to a pair of diesel engines providing 4,500 hp. The Bucyrus RH400 is currently owned by Caterpillar.

What Was the World's First Hydraulic Excavator?

What is the World's Heaviest Excavator?

The world's heaviest excavator is also the world's heaviest land vehicle: the Bagger 293 bucket wheel excavator. Manufactured by the German company TAKRAF, the Bagger 293 weighs 14,200 tons and requires a crew of five operators. Its official name is the MAN/TAKRAF RB293, and it can remove 8.5 million cubic feet of earth in a single day. When this monster has to be moved, it travels at about 1 km/hr. It originally cost about $100 million dollars to build, and it currently resides in Germany. The Bagger 293 is even large enough to be seen on satellite photos!

Excavators come in all sizes -- from the tiny micro-excavators to the massive RH400. Their history, including a whole slew of world records, is fascinating. Excavators, diggers, and 360s are vital to today's mining and construction industries, although most of us don't need one as big as the Bagger 293 or the RH400.