Self-Driving Track Loaders: What Are They Really Capable of Doing? 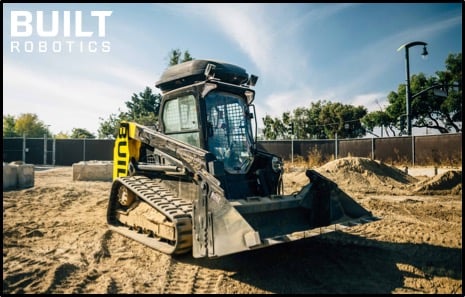 Built Robotics has introduced an autonomous (self-driving) track loader that promises to disrupt the construction equipment industry. In this Shop Talk Blog post, we share some of the questions and answers that we had about this technology, such as what its capabilities are and how it works.

What is an Autonomous Track Loader?

Autonomous means that the track loader drives itself. This goes a step beyond remote control, where there is still an operator in control of the machine but not sitting in the machine itself. An autonomous track loader, or ATL, can perform many of the same functions of a normal track loader but does not require direct human control to accomplish basic tasks.

Reasons for Its Development

According to the Built Robotics website, there are some specific reasons why autonomous construction equipment like the ATL are needed:

How an Autonomous Track Loader Works

Automated track loaders allow supervisors to load up project plans using an iPad. Special software enables the machine to interpret the project plans and develop its own process for accomplishing the task. A combination of powerful software and precise sensors enable the machine to work safely and efficiently until the task is completed.

The ATL uses augmented GPS to determine its current position down to the cm (less than ½ in). This process also tells the machine where it needs to go. The GPS makes use of an on-site base station and satellites. The Built Robotics ATL uses LIDAR to “see” what is in front of it. The LIDAR used on the ATL has been modified to be rugged enough for surviving the vibration and jarring that a compact track loader experiences in a real world environment. Part of the purpose of the LIDAR is, of course, to avoid obstacles; the other part is to measure how much material it has in the bucket. The majority of the sensors and electronics involved are housed in a cargo container that fits on top of the track loader.

Capability of the Built Robotics ATL

Currently, the ATL's primary use is excavation.  The procedure for having it start a project is simple:  the supervisor provides the ATL the coordinates and depth for the excavation and lets it do its job. It doesn’t work any faster than your typical operator, but it can …

Note that there will be an on-site supervisor ready to hit an emergency stop button should anything go wrong, and a geofence is set up to make sure the ATL doesn't leave the construction area.

As mentioned, there must be someone on-site to make sure nothing goes wrong with the ATL. That means you can’t just turn it on and leave for the day. For safety reasons, its work area is surrounded with concrete blocks to prevent (or at least slow down) any unexpected escape attempts, in addition to being enclosed by an electronic geofence. It cannot take the place of a skilled operator when problems and unexpected issues arise, which is why it is limited to cut-and-dried excavation projects with well-defined parameters in low-traffic construction sites. In short, the technology is still in its infancy -- but it's growing fast!

Where Humans Fit In

In an interview with CNBC, the founder of Built Robotics -- Noah Ready-Campbell -- explained how humans fit in with autonomous construction machinery:

Although ATL technology is in its infancy, it has tremendous potential to cause a positive disruption in the field of construction equipment. One of the concerns about this type of technology is that it will replace skilled human operators; the goal of Built Robotics, however, is to let machines take over the dangerous and repetitive aspects of the job so that skilled operators can focus on the tasks that require their talent and finesse.