The history of continuous tracks is far more interesting than one might imagine. In this blog post, we are going to take a look at their early history starting way back in the 1770s. Let’s start by going back to the time when the United States were still a British colony … 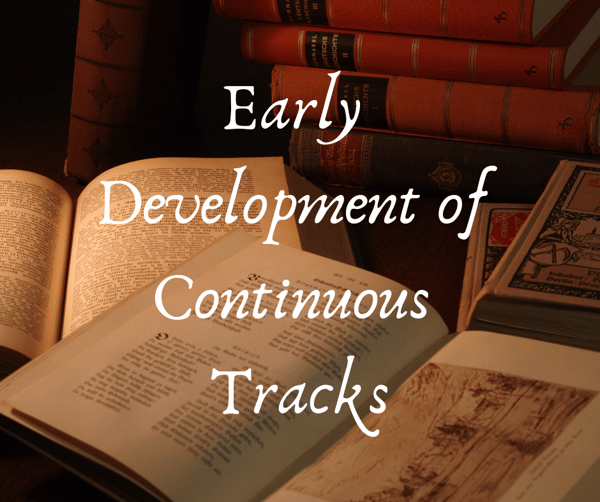 Here are a few other blog posts you might enjoy ...

The history of continuous tracks can be traced to the 1700s when Richard Lovell Edgeworth (a British politician and inventor) worked off and on for about forty years with the idea of a “cart that carries its own road.” Isn’t that a poetic way of describing continuous tracks? His idea, however, was never fully realized and remained just an interesting concept.

In the 1830s, a Polish mathematician, physicist, and inventor (among many other things!) named Józef Maria Hoene-Wroński worked on a similar concept for continuous tracks but was never able to bring his to life, either. His disappointment was due in part to a failure to raise funds to pursue the idea.

Next in line to tackle the design was British inventor Sir George Cayley, who was working in England around the same time as Hoene-Wronski was working in Poland. Cayley is probably best known for his pioneering work in flight and early aircraft designs. His idea of a continuous track, which he dubbed a universal railway, didn’t fly very far, though. A picture of his design, taken from an issue of Mechanics Magazine in 1826, is shown below. 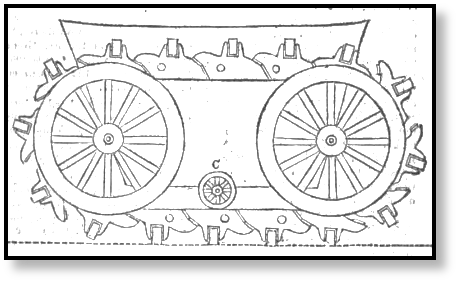 During the same time period, Dmitry Zagryazhsky, a Russian Army captain and inventor, designed and patented a “carriage with mobile tracks.” His patent was annulled, however, when he could not find the funding to build a prototype — and, once again, a lack of funding slowed down the development of the continuous track.

In the 1840s James Boydell received a patent for a “dreadnought wheel.” While it doesn’t look like the modern track system, the dreadnought wheel worked on the same basic principle. This design opened the way for caterpillar-style tracks to be taken more seriously. The image below shows Boydell’s dreadnought wheel, and with a little imagination you can see how it worked.

The dreadnought wheel became a common sight during the Crimean War (if that sounds familiar, think Florence Nightingale) as the British Royal Arsenal started manufacturing them. In fact, while dreadnought wheels were being used in the railroad industry, it was the military that showed the greatest interest in them.

The next step in the evolution of the continuous track occurred in the 1850s after the Crimean War when John Fowler modified the design of the dreadnought wheel to include tracks that wrapped around a pair of wheels with an idler wheel in-between to support the track. The track itself was comprised of only eight segments. 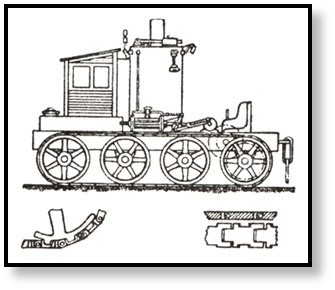 Next on the timeline for continuous tracks we have Russian Fyidor Blinov. In the 1870s he developed a “wagon [that] moved on endless rails (caterpillar).”  This was further developed by Blinov into a self-propelled steam-powered “caterpillar tractor."

During the same time that Blinov was working in Russia, an American named Henry T. Stith was developing multiple prototypes of continuous tracks. This Civil War veteran, ventriloquist, inventor, and magician developed one particular design he named the “traction wheel.” He implemented the traction wheel on an off-road bicycle he built for his son in 1900. One of the images from his patent is shown below. Note that track system on the wheels.

In England, during this same period of time, Frank Beamond was also getting patents, like Blinov and Stith, for caterpillar-style tracks. One of his patents was for a “transporting apparatus” shown below, which makes use of a track and wheel system more similar to what we see today.

Continuous tracks wouldn’t gain commercial success until the 1900s through the work of Alan Orlando Lombard with his combustion powered tractor crawler (one of which remains functional to this day). A picture of his tractor truck, taken from his 1917 patent, is shown below. You’ll notice the caterpillar style tracks on the rear. Benjamin Holt, of Holt Manufacturing (which got their original start manufacturing wagon wheels), paid Lombard for the rights to manufacture his tractor crawler and it began to grow in popularity. 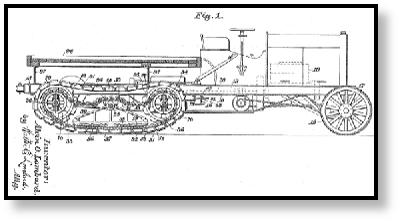 During this same time Richard Hornsby and Sons, a British manufacturer of agricultural equipment, was developing another type of continuous track vehicle. Their design most closely matches the modern tracked equipment design and was dubbed the “Hornsby crawler.”

So, where did the brand-name “Caterpillar” come from? Well, it started when a soldier who was present at the testing of a “Hornsby crawler” nicknamed it the “caterpillar.” Holt had also been using the name crawler for his machines, and decided he liked the name caterpillar so much that he had it trademarked before Hornsby even thought of it. The Caterpillar Tractor Company was born when Holt Manufacturing merged with the C.L. Best Tractor Company in 1925.

This history of continuous tracks is a long one, meeting with several false starts until it reached the implementation we know today.  It is also a good illustration on why we shouldn't give up on our ideas and inspiration! 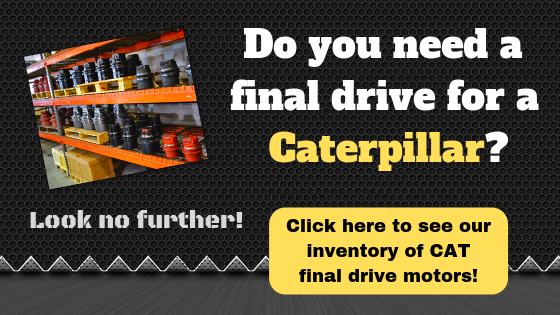