The Kubota KX71-3 is a powerful compact excavator with a reputation for reliability. Find out what we discovered when we “autopsied” a final drive taken from a Kubota KX71-3 -- you might be surprised at what took down this final drive motor!

A customer sent in a final drive taken off a Kubota KX71-3 mini-excavator. He told us that when he started having problems with it he attempted the repairs himself. After investing in several different replacement parts and struggling with it for a while, he sent it in to us to have it professionally assessed. 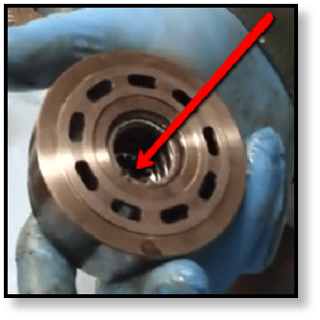 One immediate issue revealed itself as soon as we opened the shipping crate: the rotator group was in a bag by itself instead of in the final drive motor. The result was some serious damage, including gouging and scratches, to key surfaces in the rotator group. This damage happened during shipping. The surfaces involved must be kept smooth for proper final drive motor performance. Sadly, the damage that occurred could not be lapped out because of how deeply the the gouges extended below the surface. The rotator group parts affected ended up a total loss.

Replacement of Only One Gear of a Set of Three

Our technicians continued by thoroughly cleaning the outside of the final drive before opening it up. The seals were disposed of because we always replace them. As the parts were being cataloged and cleaned, another issue was uncovered. Of the three planetary gears in the final drive, only one had been recently replaced. A good rule of thumb is this: if there is more than one of something, replace them all at the same time. The original owner noticed damage to one of the gears and replaced only that one out of a set of three, not doubt to save money.  In the long run, however, it cost more.

The damage that lead to that replacement occurring was contamination in the planetary side of the final drive motor. Abrasive contaminants caused damage to the surface of the gear teeth. This kind of damage can in turn cause the formation of metal burrs on teeth. This burrs break off and begin to cause damage elsewhere. In addition, this type of damage will weaken the surface of the gears and make additional damage even more likely. Our technicians found similar damage on other components in the final drive motor.  Everything pointed to abrasive contamination as the culprit. 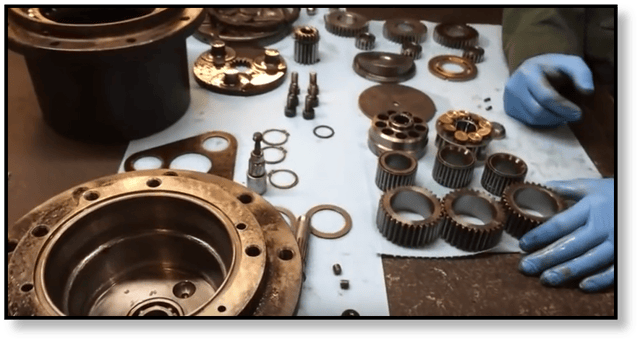 Our examination of the drive and its components pointed toward contamination as the primary source of the problems. Once abrasive contaminants got inside the final drive, they began to scrape away at key surfaces and components. Sadly, the damage was so extensive that the most economical approach for the customer would be to purchase a reman drive.

Contaminants will eventually result in something wrong with your final drive, and the damage can be extensive.  These contaminants can be introduced when adding or checking fluid levels (including hydraulic fluid and gear oil) or when a seal begins to fail and is not replaced right away. Always use clean practices when opening up the hydraulic system or checking the gear oil. And one last thing: if there is more than one of a part, replace them all at the same time. 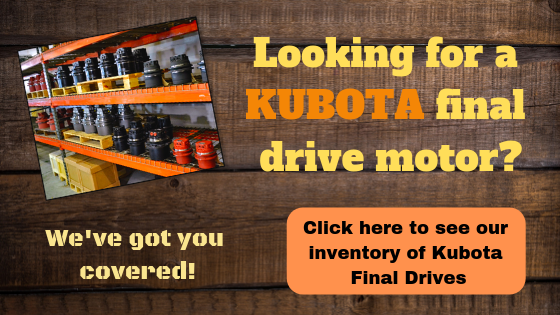